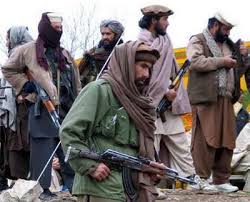 Local officials said that Taliban reached to the district center during the day and set on fire the governor’s office and police HQ.

Officials from the government compounds were moved to a safer location. The clashes reportedly have casualties but a specific number was not announced by the time this report was filed.

Taliban spokesman has sent a message to media claiming responsibility for the coordinated attack. Taliban increased attacks on security forces following the announcement of their spring offensive in April.