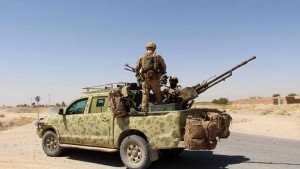 Taliban militants have seized around 200 armoured vehicles from Afghan security forces in recent months according to the country’s former spy chief.

“We lost 200 Humvees and Rangers in two or three months as the result of incompetence,” Rahmatullah Nabil told Afghan broadcaster Tolo TV on Tuesday.

Light and heavy weapons have also been seized by militants, according to Badakhshan provincial governor Faisal Bigzad.

He said there was a risk the equipment was already being used by “the enemy” against local troops and urged foreign forces to help in destroying the items.

Theft of security forces’ guns and vehicles by the Taliban has also been reported in other Afghan provinces, while posts on social media show Taliban fighters standing next to captured Humvees or rows of rocket launchers.

A security expert, who wanted to remain off the record, told dpa that the items are mainly stolen during attacks on security checkpoints.

The checkpoints are often won back quickly by Afghan forces, but the equipment is not retrieved, he said.

A spokesman for the NATO-led military mission in Afghanistan, Charles Cleveland, said that the stolen armoured Humvees did have the effect of making the Taliban very visible.

“This makes it easier for us to smoke them,” he said.