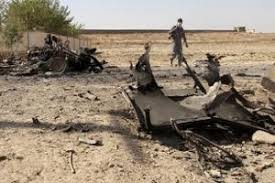 Six people, all civilians, were killed and two others wounded as a roadside bomb struck a car in Afghanistan’s eastern Kapisa province on Tuesday, Xinhua news agency quoted provincial police spokesman Abdul Shaeq Shurash as saying Wednesday according to bernama.com.

The roadside bomb, according to the official, was planted by the Taliban militants on a road in Nijrab district and struck a car Tuesday evening, killing six commuters including women and children on the spot and injuring two others.

Taliban militants who are active in parts of Kapisa province with Mahmud-e-Raqi as its capital 65 km north of Kabul haven’t commented on the report.