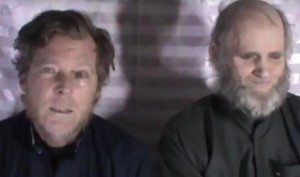 The Taliban militants group has released the video of an American and an Australian professor who were kidnapped by the group last year, like reported by khaama.com..

The 13-minute video purportedly shows the making desperate pleas for their lives.

The hostages have been identified as Timothy Weekes, an English teacher from Sydney, and Kevin King, a professor from the United States.

The video is released months after reports emerged that the US forces conducted an operation to release them but achievement was made in the raid.

Officials privy of the developments have said the two professors are being kept by the Haqqani terrorist network, a notorious militant group close to the Taliban insurgents.

It is believed that the US soldier Bowe Bergdahl was also kept by the troorist network after his abduction but was subsequently released in a prisoners swap.

The Haqqani terrorist network is accused of staging numerous deadly attacks in Afghanistan including a coordinated attack on VIP protection unity in Kabul which left at least 74 people dead and over 300 others wounded.