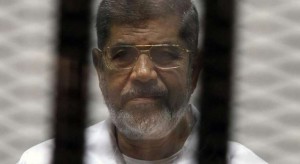 The Taliban is calling upon every “influential” Muslim to try to save Mohamed Morsi from the death penalty in Egypt.

The former president, along with 105 other defendants, was sentenced for the bloody Natroun jailbreak after the 2011 revolution, which allowed Muslim Brotherhood, Hamas and Hezbollah prisoners to escape — one of those was Morsi. After he was overthrown in 2013, a fresh investigation was launched into the prison break.

The verdict goes to the grand mufti for non-binding review before final sentencing on June 2. If his death sentence in the jailbreak case stands, he will be put to death by hanging. He’ll also be the first Egyptian president ever to face capital punishment.

Muslim Brotherhood Supreme Guide Mohamed Badie was sentenced to death along with Morsi.

The Taliban statement today said they “strongly condemning this cruel decision” and call “on all international and local human right organizations, the United Nations, especially Muslim countries and Islamic Conference as well as all influential individuals of the Islamic world to fulfill their humane and Islamic duties from the point of human sympathy and Islamic brotherhood in order to challenge this harrowing ruling and prevent the coup d’é·tat regime of Egypt from carrying out such illegal unethical and inhumane actions.”

“It is absolutely astonishing that the western world and those that shout equity, justice, human rights and even animal rights have either adopted complete silence in this issue or are indifferent to the extent of only limiting their response to mere condemnation without feeling any other sense of responsibility. Would the western world especially America have ever tolerated such barbarism towards any of its own citizens? No they would have never. It is from here that the hypocrisy of claimants and thespians of ‘Rights’ and ‘Justice’ is being further exposed to the world and nations.”

The Taliban, operating under the name the Islamic Emirate of Afghanistan, said “fair-minded nations especially people of the Islamic Ummah and Muslims must take to the streets to force the power bearers of feeling responsibility towards this and other such inhumane decrees and take practical preventative steps.”

Terrorist attacks have already increased in the restive Sinai peninsula since Morsi’s sentencing.

State Department spokesman Jeff Rathke told reporters Monday that they are “deeply concerned by yet another mass death sentence handed down by an Egyptian court to more than 100 defendants, including former President Morsi.”

“We have consistently spoken out against the practice of mass trials and sentences which are conducted in a manner that’s inconsistent with Egypt’s international obligations and which are frequently used against members of the opposition and nonviolent activists. This practice, which in this instance was directed against, among others, a former elected president, is unjust and undermines confidence in the rule of law,” he added.

The U.S. has lobbied for an “inclusive” Egyptian government that includes the Muslim Brotherhood, and protested Morsi’s overthrow.

“We have made our views and we continue to make our views clear to the Egyptian Government. We believe that all Egyptians, regardless of their political affiliation, are entitled to equal and fair treatment before the law,” Rathke said. “That includes full respect for their rights to due process, and we remain opposed to politicized arrests and detentions.”