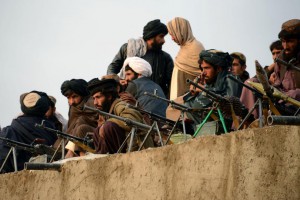 Fresh fighting has broken out in recent days between the Taliban and the Islamic State group (aka ISIS) in Afghanistan, resulting in dozens of deaths on both sides, Voice of America reported Tuesday. Battles between the two rival militant groups erupted after hundreds of Taliban fighters launched assaults against ISIS bases earlier this week.

The Taliban, which ruled Afghanistan from 1996 to 2001, took control of at least two districts in eastern Afghanistan from ISIS, but failed to drive the group out of their stronghold in the Nazyan district. The Iraq and Syria-based extremist group, ISIS, has made inroads in the war-torn country in recent months, using its hold on the Nangarhar province to push deeper into the country. Last month, the Taliban launched its own radio station to aid in recruitment.

Although the Taliban also has seen gains in Afghanistan in recent years, its leadership has been in disarray since August, when its former leader, Mullah Omar, was confirmed dead. The news created a power vacuum and led to a split in the group.

In recent months, the Taliban has viewed ISIS as a threat to its campaign against NATO forces in Afghanistan. The rift within the Taliban was expected to help ISIS expand its influence, as some members have reportedly defected from the Taliban to join ISIS.

Taliban spokesman Zabihullah Mujahid confirmed the clashes between the Taliban and ISIS fighters, Voice of America said, but did not offer further detail. Pakistani media outlets reportedly quoted officials confirming the Taliban attacks on ISIS fighters in Afghanistan, near the border with Pakistan. They said more than 150 fighters – mostly ISIS supporters – were killed.