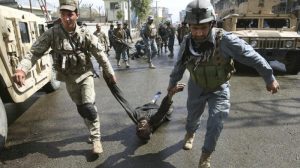 The Taliban have killed 28 paramilitary policemen in fighting in southern Afghanistan, officials said, the latest losses in an ongoing siege of a government-controlled district that could tip into insurgent hands, like reported by thenational.ae.

One local official said the Taliban executed the police after they had surrendered, but the insurgents denied this and AFP was not immediately able to confirm the claim.

If proven, a mass shooting of dozens of captives would mark a grim new low point in Afghanistan’s recent violence, which has been worsening in recent weeks despite the start of peace talks between the insurgents and the government.

The incident occurred in the Gizab district of the southern province of Uruzgan, where intense fighting has raged for days as the Taliban besiege outmanned and outgunned Afghan police and army outposts.

Zelgai Ebadi, a spokesman for the Uruzgan governor, said Taliban fighters offered 28 local and national police a chance to go home if they surrendered on Tuesday night.

“But after taking their guns, the Taliban killed them all,” Mr Ebadi said.

Mr Barekzai would not say if the men had been killed before or after surrendering.

A third local official, speaking on condition of anonymity, put the toll at 28-30 police, adding that three policemen managed to escape.

The interior ministry declined to comment on the circumstances of the deaths.

In a statement, the Taliban denied it had slaughtered the policemen after they surrendered.

“Enemy claims that they were executed after surrender are baseless. Mujahidin [Taliban fighters] repeatedly asked them to lay down arms and end hostility, but they insisted on fighting,” Taliban spokesman Yusuf Ahmadi said on Twitter.

The deaths come after at least 14 Afghan policemen and soldiers were killed during the same battle overnight on Sunday.

Taliban and Afghan government negotiators are meeting in the Qatari capital, Doha, where they are trying to find a way to end 19 years of war.

A hopeful start to the peace talks on September 12 was immediately marred by fresh violence across Afghanistan.

Negotiations are moving slowly, with the two sides trying to thrash out various parameters before deciding an agenda.