You are here: Home / West Asia / Taliban increase attacks on NATO in turf war against IS 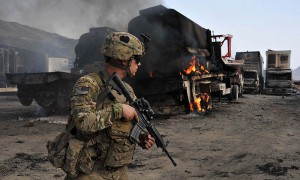 The Taliban are increasing suicide attacks in and around Kabul in Afghanistan, in a turf was with ISIS. As NATO forces withdraw, attacks against NATO and Afghan civilians are a statement of who is really in charge, mostly in a show of power against ISIS.

In this sense, Monday was a typical day.  A German convoy was hit by a Taliban suicide bomber in Kabul. Two soldiers were slightly injured, Spiegel reports. The target was a German Brigadier General, Michael Podzus, Spiegel reports. The General makes part of NATO’s “Resolute Support” mission, with a mandate to train and advice the Afghan army.

Elsewhere in Kabul on Monday, the Taliban claimed responsibility for a truck bomb attack on Camp Baron, a residential complex near the city’s airport, which killed over 30 civilians, Reuter reports; a suicide bomber blew himself up near a police checkpoint. Finally, Afghan forces were able to end a 25-hour siege of the the Indian consulate in city, near Kabul.

In thickening there attacks, the Taliban are asserting their presence. Meanwhile, in the “enemy-of-my-enemy-is-my-friend” spirit, on Christmas Day, CNN reported on the Russian admission that Moscow is sharing intelligence with the Taliban.  Maria Zakharova, the Foreign Ministry’s spokeswoman, said the contact with the Afghan was limited to the fight against ISIS. Meanwhile, the Taliban deny the embarrassing cooperation with Russia. US commanders told Congress in November that ISIS has over 3,000 fighters there.