You are here: Home / West Asia / Taliban gunned down four de-miners in Helmand 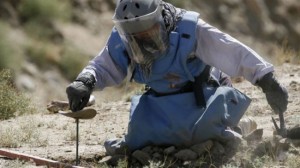 A group of militants, believed to be Taliban, have gunned down four de-miners in an attack in southern Helmand province of Afghanistan.

Officials say the de-miners were busy in their routine job in Gerishk District when Taliban attacked them around 11:00 am today.

One de-miner also sustained injuries in the attack.

Omar Zwak, spokesperson for the governor of Helmand province confirmed the incident.

Although, local officials hold Taliban responsible for the attack but the group’s spokesperson has not yet commented on the report.

Helmand is among the volatile provinces of Afghanistan where anti-government armed militant groups, including Taliban, are actively operating.

Currently, there are heavy clashes between security forces and Taliban in parts of the province.