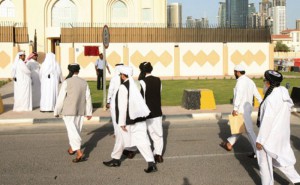 The Taliban delegation demanded the release of prisoners and removal of the group’s leaders from the UN blacklist during the informal talks held in Qatar, it has been reported.

The group also demanded that the Taliban group should be identified as a formal movement before they agree to participate in peace talks.

The Afghan Taliban officials, based in Qatar and the United Arab Emirates, told Reuters that the talks yielded little results.

The officials further added that the U.S. officials were part of the process, although they did not specify whether they were directly involved in the talks.

Afghan and U.S. officials demanded that the Taliban declared a ceasefire, laid down arms and started formal peace talks, said the UAE-based official.

“Like our previous meetings, it was a waste of time and resources, as we could not achieve anything from the meeting,” said the UAE-based official.

This comes as the Taliban group spokesman Zabiullah Mujahid rejected that the group’s delegation participated in informal talks with the Afghan government delegation in Qatar, calling the report by the Guardian as baseless.

Mujahid further added that the group remains firm on its conditions to participate in peace talks, which included the exit of all foreign troops from the country and establishment of a strict Islamic system.