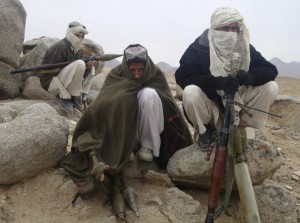 The Ministry of Interior on Tuesday said Taliban and Daesh fighters are being trained in Pakistan and then sent to Afghanistan to fight security forces.

Interior Minister Noorulhaq Olomi said insurgents are recruiting the youth and are continuing their attacks on Afghanistan while giving orders from Pakistan.

Speaking at an event on Tuesday which saw security forces destroy 19,000 kgs of drugs along with a large amount of alcohol, Olomi said drugs are one of the main revenue sources for insurgents.

Olomi said: “Taliban and Daesh fighters as always are being trained in Pakistan. They are equipped and financed there and are then sent to Afghanistan. They [insurgents] are being given hope while in Pakistan of achieving their goals in Afghanistan.”

He went on to say: “Drugs are one of the main sources of income for insurgents in the region. They continue their attacks and are recruiting our youth through drugs.”

Meanwhile the Counter-Narcotics Minister Salamat Azimi said the problem of drugs is a major challenge for Afghanistan.

He said: “The drug problem is a serious challenge for Afghanistan and the international community.”

“In order to overcome the problem, we need the joint cooperation of the international community.”

The counter-narcotics department under MoI recently announced its achievements in fighting the scourge. Since January they have seized over 100 tons of drugs in 1,135 operations.

They also said the department had seized over 400 vehicles, 240 weapons and 244 mobile phones from drug dealers and smugglers.

The seizure of drugs increased by 16 percent this year and alcohol by 36 percent.

Security force members from the unit meanwhile arrested a total of 1,876 people – including 20 policemen, 29 soldiers, 26 women and two foreigners – a Kazakhstani and an Iranian – for dealing and smuggling drugs.