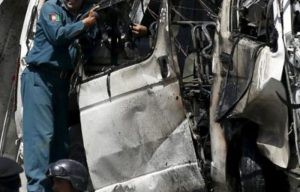 At least 10 Afghan civilians were killed in an explosion in the northwestern Badghis province of Afghanistan, local officials said Friday.

He said the vehicle carrying civilians was on its way from Langar area to the outskirts of the district when it struck an IED planted by the Taliban militants.

Taliban insurgents and militants belonging to the other insurgent groups frequently use Improvised Explosive Device (IED) as the weapon of their choice to target the security forces but the ordinary civilians are often targeted in such attacks.

IEDs are considered as the main motive behind the growing casualties of the Afghan National Defense and Security Forces (ANDSF) besides contributing largely to civilian casualties.

The United Nations Assistance Mission in Afghanistan (UNAMA) in its latest report said the anti-government elements remain responsible for 60 percent of the civilian casualties with ground engagements continuing to cause the highest number of civilian casualties, followed by complex and suicide attacks and improved explosive devices (IEDs).