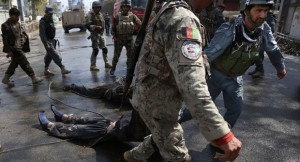 The Taliban militants, according to the official, stormed a police checkpoint in Mullah Ghulam area of Khan Abad district on Friday morning, killing the checkpoint commander Abdul Jabbar along with two others on the spot.

Taliban militants also suffered casualties in the firefight that lasted for a while, the official added.

The relatively troubled Kunduz province has been the scene of increasing Taliban-led militancy over the past few years.