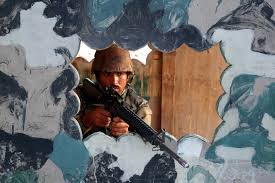 Eighteen Afghan soldiers were killed and three others injured in a Taliban attack in Takhar province, an official confirmed to asianlite.com.

The attack started at midnight after dozens of Taliban militants launched an offensive on a district police station and a nearby military camp in Khwaja Ghar district, the provincial police spokesman told Xinhua news agency.

The militants who came from mountains tried to overrun the district police station and seize the control of the district, but their plan was thwarted by the security forces.

Several militants also sustained casualties based on the bloodstains on the clash site, the official noted.

The Taliban militant group has not responded to the report so far.

Violence decreased in Afghanistan after a peace deal was signed between the US and the Taliban in Qatar on February 29 as well as a joint declaration issued by the American side and the Afghan government.

However, sporadic clashes and fighting occur in countryside as Taliban militants have been attempting to take territory and consolidate their positions.

The Taliban has shared a list of 50 attacks conducted by the US and Afghan forces following the US-Taliban peace deal inked in late February, accusing Washington of violating terms of the agreement, it was reported.

Sharing a three-page document exclusively with TOLO News on Sunday, the Taliban political office in Doha claimed that 33 drone attacks and airstrikes were carried out against Taliban targets in 19 provinces from March 9 to April 10.

The Taliban said in the document they have lost 35 of their fighters in 17 of the incidents, and they blame foreign forces for killing 65 civilians in 33 incidents.

This is the first time that the Taliban have provided numbers to back their claims that the US has violated the agreement which was signed after 18 months of negotiations in Doha on February 29.

The US-Taliban deal is facing multiple challenges including a delayed and contentious prisoner release, as well as a delay in the start of intra-Afghan negotiations, which was scheduled in the agreement to start on March 10.

Reacting to the Taliban claims, the top US general in Afghanistan, Gen Scott Miller told TOLO News on Sunday: “All sides, but especially the Taliban, must reduce violence to allow the political process to take hold.”

His spokesman Col Sonny Leggett elaborated that Washington “remains committed” to the deal with the Taliban, adding that the “US Forces-Afghanistan, in accordance with the written terms of the agreement, continue to support and defend the Afghan Security Forces”.

In a report last week, TOLO News said that the Taliban carried out 2,162 attacks following the one-week reduction in violence (RIV) that started on February 22 and led to the signing of a peace agreement.

The Afghan and NATO forces have conducted 425 attacks against the Taliban post RIV period.

The Taliban have also questioned some of the 361 released prisoners, calling them “unidentified.”

The Afghan government, according to sources, also says that from the 60 released prisoners by the Taliban, there are only 17 members of the Afghan forces.

Based on the agreement, the two sides should not attack each other’s bases and military facilities in Afghanistan, and the Taliban should not allow other militant groups to operate in areas under their influence.

Gen Miller travelled to Doha last week to discuss the reduction in violence with the Taliban, and the Taliban have shared their concerns about these attacks with him.

There are disagreements between the US the Taliban on the nature of the attacks and the reasons why these attacks have happened.

According to sources, the US and the Taliban are discussing every single incident through their military channel to examine the reason behind each incident.