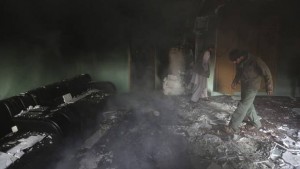 Taliban gunmen have stormed the home of an MP in Kabul, killing eight people and leaving the parliamentarian wounded after he jumped from the roof to escape.

The Taliban claimed responsibility for the attack, which began late on Wednesday, saying they targeted a meeting of military officials.

They fought his guards for several hours, eventually killing eight people, including family members, friends and members of his security detail. Three attackers were killed.