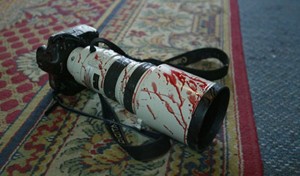 The France-based non-profit organization that promotes and defends freedom of information and freedom of the press, called on the authorities to do everything possible to protect journalists and media outlets in Afghanistan.

The statement further added that Taliban have been intensifying armed attacks on civilians and openly threatening freedom of information despite countries such as the United States, Iran, Norway and Qatar are “normalizing” their relations with the Taliban and certain Afghan politicians are sitting with them at the negotiating table.

“The Taliban, and now members of Islamic State, are sowing terror in several northeastern provinces including Badakhshan, Nangarhar, Baghlan and Nuristan. Freedom of information in these provinces has gone from being limited to non-existent, giving rise to new information black holes,” RSF said.

It also added that the media outlets have been the targets of armed attacks. “They include Radio Donya Novin in Charikar (Parwan province) and the regional bureaux of the independent Afghan news agency Pajhwok and the US government-funded Voice of America (VOA) in Jalalabad (Nangarhar province) on 12 June, when at least two VOA journalists were injured. Several sources described this as “the first Islamic State action” in Afghanistan,” RSF added.

The statement also added that journalists have been forced to stop working due to intense clashes in some regions, especially in Badakhshan and Nangarhar where entire villages have fallen under rebel control.

“These provinces now rank alongside Helmand in the south and Khost in the east as regions where the Taliban have terrorized the media,” RSF said.

A journalist in Jalalabad, the capital of Nangarhar, quoted in the report on the condition of anonymity, said “Nangarhar has always been a violent province but the situation has become even worse in recent months.”

“The rebels are carrying out attacks almost every day but we cannot cover them. The security forces have told us they cannot guarantee our safety and we don’t want to put our lives in danger, so we cannot do our job. And working for the media has become even more difficult for women journalists. Sometimes they cannot even leave their homes,” the journalist said.

RSF also added that Taliban and other armed groups are unfortunately not the only ones who target the media but the warlords, local politicians and government forces also help to create a climate of fear designed to keep journalists at a distance, especially during military operations.