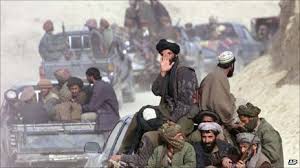 Resistance of Afghan National Security Forces ANSF is continuing alongside of Taliban and Daesh in Nanghar province.

Nohman Atifi National Army spokesman in the east of the country told BNA, in the conflicts two members of Daesh were killed and several Taliban were wounded.

He added, clashes between the militants of these two groups is continuing in Shollan of Chaparhar district of the province.