You are here: Home / West Asia / Taliban and Afghan military fight for besieged city of Kunduz 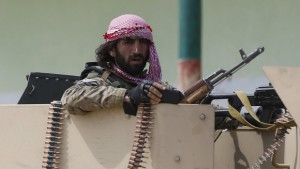 Nearly two weeks of clashes around Kunduz have forced thousands of people to flee their homes and posed the biggest challenge to the NATO-trained Afghan army and police since foreign combat troops withdrew at the end of last year.

Government forces have vowed that the northern provincial capital will not fall into the hands of the Taliban, who officials said were fighting alongside foreign jihadists.

But the difficulty they are having in driving insurgents from the southern district of Gul Tepa and other areas has raised fresh concerns about the strength of Afghan forces, 13 years after a US-backed intervention drove the hard-line Islamist Taliban from power.
Advertisement

The fighting prompted Afghan airline East Horizons to suspend its once-weekly flight from Kabul to Kunduz, the only commercial passenger air link to the northern city.

“Since there are security problems we have stopped,” said Omid Sahi, an official at the airline’s office in Kabul.

“There is a woman among those who were killed,” he said, adding that the foreigners were identified as being from Pakistan, Uzbekistan and Chechnya in Russia.

The border region between Afghanistan and Pakistan has long been a magnet for Islamist militants of many nationalities.

Officials have said some foreign jihadists operating in the area have sworn allegiance to Islamic State, the extremist group known in Afghanistan as Daesh that controls parts of Iraq and Syria.

However, Mr Hussaini said police had found the Taliban’s white flag along with the foreign fighters killed.

“We haven’t found any evidence that Daesh is involved in the Kunduz fighting,” he said.

The Taliban’s major push in the north, away from its traditional strongholds in the south and east of Afghanistan, is seen as a bid to take territory from areas where Afghan forces were spread thin.

Afghan security forces are suffering record casualties in their first battles against the Taliban since the US combat mission in Afghanistan ended in December after more than 13 years.

The number of killed and wounded so far this year was about 70 per cent higher than during the same period last year, said Colonel Brian Tribus, director of public affairs for NATO’s Afghanistan mission.

Last year’s casualty rates, which marked a fifth consecutive annual increase, were labelled in November as “not sustainable” by a top US general. With Afghan forces operating without the previous levels of US and NATO support that they previously enjoyed, the body count has soared.

“We are taking so many casualties, that’s the reality,” Afghan Interior Minister Nur al-haq Ulumi said. “We are fighting by ourselves.”