You are here: Home / West Asia / Taliban, Afghanistan government to hold second round of peace talks by July end 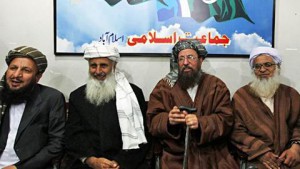 Afghanistan government and the Taliban representatives are expected to hold the second round of their peace talks at the end of this month, officials said on Saturday.

The ice-breaking talks started on July 7 when the warring sides held their first open and direct talks at Pakistan’s hill resort of Murree near capital Islamabad.

Pakistan Foreign Office had said that as part of its commitment to facilitate an Afghan-led and Afghan-owned peace and reconciliation process, it hosted a meeting between Afghan government and Afghan Taliban representatives in Murree.

In a statement issued after talks, it said the second round be held after the holy month of Ramazan, which already ended on July 17.

A senior Foreign Office official said that the both sides have agreed on a follow up meeting by the end of this month.

He refused to give the exact date and venue.

Some media reports, however, suggested that the talks would be held either on July 30 or 31.

Also, there are speculations about Pakistan or China as being the venue.

There is not fixed agenda but the two sides are expected to discuss the ceasefire which the Afghan government badly needs to boost peace and stability in the country.

It is also believed that this time the Taliban delegation would be more broad-based and officials from its Qatar political office will also attend the talks.

On the positive side, both Taliban and Afghan negotiators would be more confident after rebel chief Mullah Omer in his Eid message supported the peace talks.