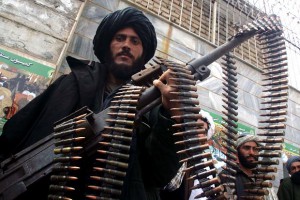 The Taleban may have sheltered Osama bin Laden before the September 11 attacks, but the Afghan militants want nothing to do with the Islamic State group, branding it “scruffy and uncouth”.

Spokesman Zabihullah Mujahed said the Taleban was giving up on holding talks with IS and wanted it destroyed to prevent it from gaining any foothold in Afghanistan. He accused the media and intelligence agencies of inflating the IS’ strength.

“We’ve used all reasonable chances and options for peace efforts, but apparently those people are not rational, and reconciliation and talks with them is not possible,“ Mujahed said by email. He called the group, known by the Arabic acronym Daesh, “a scruffy and uncouth production of nations in the Middle East” that “has no place in our community”.

For the Taleban,IS is just another group in a long list of enemies that have tried and failed to uproot it from the Pashtun-speaking desert-like areas of southern Afghanistan. Just as Daesh fighters arrive, the US and its allies are looking to exit after 15 years of war that have killed about 2,300 American soldiers and cost more than US$700 billion.

In a response to emailed questions, Mujahed sought to portray the Taleban’s strength as world powers look to restart peace talks. Besides ridiculing IS, Mujahed downplayed internal divisions, repeated calls for foreign forces to leave the country and said the group controlled 70 per cent of Afghanistan.

In an interview in India on Wednesday, Chief Executive Officer Abdullah Abdullah – Afghanistan’s second-most powerful policy maker – disputed the Taleban’s territorial claims, calling them “exaggerated”. He also said the government makes no difference between the Taleban and IS, and will continue to fight any groups that don’t join in peace talks.

IS militants emerged over the past few years in conflict-hit areas of Afghanistan and Pakistan after some former Taleban members pledged allegiance to Abu Bakr al-Baghdadi. The group has captured some small areas in eastern Afghanistan, and US commanders estimate it has as many as 3,000 fighters.

IS will only grow in Afghanistan if the Taleban loses its sanctuary in Pakistan and allies of the government in Kabul stop paying for its security, according to Barnett Rubin, a senior expert on Afghanistan and South Asia affairs and an Associate Director of Center of International Co-operation at New York University.

“In that case, the Afghan government and its foreign allies will mainly have themselves to blame,“ he said in an e-mail. “At present, there is little space for ISIS to expand in Afghanistan.”

When the Afghan Taleban took power in the 1990s, it received diplomatic backing from only two countries: Pakistan and Saudi Arabia. The US overthrew the regime in 2001 after demanding that the Taleban hand over al-Qaeda’s senior leaders following strikes on the World Trade Centre and Pentagon that killed almost 3,000 people.

After 15 years of fighting, the US now wants to get out. Doing so isn’t easy: While Afghan forces are officially in charge of security, the US is paying for about 75 per cent of its military budget. Even with that cash, about a third of Afghan troops don’t re-enlist each year. Peace talks, therefore, represent a sustainable solution.

At the same time, the Taleban has stepped up its military campaign as the US has reduced troop levels.

The US, China, Pakistan and Afghanistan are looking for ways to bring the Taleban back to the negotiating table. The Taleban has several demands, including prisoner releases and the removal of key figures from a United Nations list of terrorists. Those have been rejected by the Afghan government.

For its part, the Taleban still sees the US as a much bigger threat than the Islamic State. It says IS is mostly comprised of “well-known robbers and kidnappers” who seek to scare people into achieving their goals, according to Taleban spokesman Mujahed.

“Daesh has really no connection with Afghanistan and does not belong to Afghanistan,“ he said. “If a strong central system and an Islamic administration is built up, the advances of Daesh and their recognition and embracement by our society is really not possible.”