You are here: Home / MidEastGulf / Tal Afar: The next major Iraq offensive 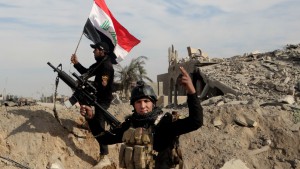 Iraq’s next major anti-ISIL offensive is in the works: cutting off ISIL’s supply route with Syria. Days after pro-government militias took control of the Tal Afar airbase west of Mosul, reinforcements are pushing in for the battle to retake the ISIL-held city of Tal Afar itself.

Men and machinery are mobilizing around Tal Afar.

Sixty kilometers west of Mosul, it’s a key strategic city for ISIL: it’s an hour’s drive from the Syrian border and ISIL reinforcements.

During the battle, ISIL operatives withdrew into the nearby city. From there they continue fighting back against Iraq’s PMU divisions with sniper and artillery fire..

“They are targeting us with sniper fire, one hundred and twenty and eighty millimetre mortar rounds. We are avoiding hitting back because of the civilians inside the city,” said Mohammed Al Barusi, PMU, Tal Afar Airbase.

When Hajdi Shabi came in and took control of the airport, they discovered underground bunker tunnels. This is like a super bunker with sleeping quarters. It also has tunnels that lead all the way from here to twelve kilometers away, to the city nearby.

Beyond strategy to remove ISIL from Tal Afar, the impending battle there has critical implications for Turkey and Iran.

Both countries seek influence in Iraq and are vying for control of the city that is characterized by a majority Iranian backed Shiite versus Turkish supported Turkmen population.