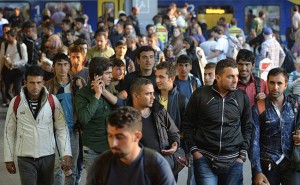 US plans to take in some 10,000 Syrian refugees increases the danger of Islamist militants entering the country as well said a top US lawmaker, who expressed strong reservations about the program.

Mike McCaul, chairman of the House Homeland Security Committee, warned that jihadists with the Islamic State group could embed with refugees fleeing the conflict in Syria, creating a jihadi pipeline.

“From a national security standpoint, I take ISIS at its word when they said, in their own words, ‘We’ll use and exploit the refugee crisis to infiltrate the West.’ That concerns me,” McCaul told ABC television’s “This Week” program.

The White House said Thursday that it hopes to scale up the number of refugees the United States welcomes from war-torn Syria in the next fiscal year.

A number of US officials have said it is possible that members of the extremist group Islamic State group could sneak into the country among those refugees.

But retired general John Allen, speaking on the same news program Sunday, said he is confident in the refugee-vetting procedures in place.

“We should be conscious of the potential that (ISIS) may attempt to embed agents within that population,” he said.

“But I also have to tell you, I have tremendous confidence in the work that has been, and is being done” by US security agencies.

Nevertheless, Allen said, “I think it’s a threat… It’s clearly something we should be thinking about.”

Republican presidential candidate Ben Carson, currently polling second among contenders for his party’s nomination, also expressed concern about how refugees coming into the United States would be vetted Sunday.

“Bringing in people from the Middle East right now carries extra danger. And we have to be extra cautious,” Carson said.

“The typical mechanisms that we use for screening people, perhaps, have to be enhanced,” Carson, a neurosurgeon who has never held public office, told ABC.

Just over 1,800 Syrian refugees have been accepted into the United States in the more than four years since the civil war in their country began. More than four million people have fled the fighting.

The United Nations has referred some 18,000 of those refugees to the US for resettling, and each case takes nearly two years to process, including interviews with US officials in refugee camps, reviews by at least four US counterterrorism agencies and a number of medical tests.

“Refugees are subject to the highest level of security checks of any category of traveler to the United States,” a State Department official told reporters.