You are here: Home / West Asia / Tajikistan to ban ‘arabic names’ as part of crackdown on Islam 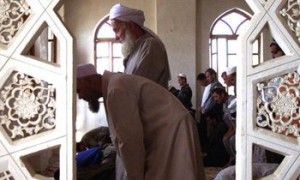 Tajikistan is debating legislation to ban Arabic names as part of an ongoing campaign against Islam that has seen men being forced to shave their beards and women in hijab being labelled prostitutes.

The president, Emomali Rahmon, ordered his rubber-stamp parliament to consider a bill that would forbid the registration of names considered too Arabic, an official in the Justice Ministry’s department of civil registry told Interfax.

“After the adoption of these regulations, the registry offices will not register names that are incorrect or alien to the local culture, including names denoting objects, flora and fauna, as well as names of Arabic origin,” Jaloliddin Rahimov was quoted as saying.

Though the law would only apply to babies born after it is passed, some parliamentarians are reportedly demanding that existing names that are Arab-sounding should be changed to Tajik-sounding ones.

If parents cannot come up with a name on their own, the Justice Ministry is preparing a list of recommended ones.

Islam is by far the largest religion in Tajikistan, practised by about 98% of the population. Religious observance has been on the rise recently, much to the dismay of the secular government which cites fears that the country’s disenfranchised and poverty stricken villages are becoming recruiting grounds for militants.

As well as clamping down on beards and hijab, authorities have closed independent mosques and encouraged imams to use their sermons to praise the president. Human rights groups say Muslims are regularly arrested on trumped-up charges that conflate faith with terrorism.

But the latest measure casts such a wide net that, if taken literally, it could catch the country’s biggest fish. The president’s name, Emomali, is a version of Imam Ali, Prophet Muhammad’s son-in-law, the fourth caliph for Sunnis and the first imam for Shia Muslims.