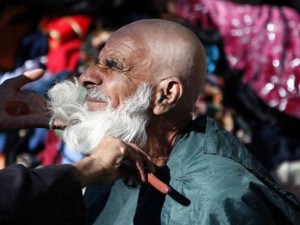 The Tajik government forcibly shaved the beards of 13,000 men to hinder them from becoming jihadis, Radio Free Europe reports. This makes part of a wider campaign against Islamic outlook, thought to curb militant identity. Approximately 500 Tajik nationals are thought to be fighting as volunteers for the Islamic State in Iraq and Syria, Chatham House reports.

President Imomali Rakhmon of Tajikistan has taken successive waves of measures that resemble those of Kemal Ataturk in the 1920’s and 1930s. Then Turkey sought to modernize society, beginning from its outlook. At the time, Turkish Republic legislation forbade Islamic garment and headwear, for men and women, exchanged Arabic scripture for the Latin alphabet, and proclaimed polygamy illegal. Islamic garments disputes of a similar kind have been also common in Britain, France, Belgium and, most recently, Estonia.

Hardline political opposition in Tajikistan is associated with political Islam and the country has suffered a bloody civil war between 1992 and 1997. The 8-million country is 90% Muslim and has since the 1990s seen successive waves of attempts to limit the social and political power of militant Islam; since 2005, children under 18 are not allowed to attend Mosques, the Washington Post reports.