You are here: Home / MidEastGulf / ‘Tactical NAV’, the mobile application in the fight against ISIS in Syria and Iraq 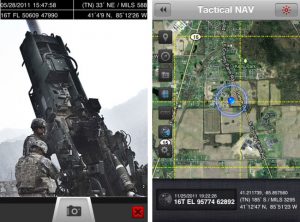 Artillery and Close Air Support (CAS) units are using a mobile application called Tactical NAV to deliver munitions on known ISIS targets in Syria and Iraq to protect local civilians and save U.S. military lives. And it’s all being conducted using the power of a smartphone, like reported by prweb.com.

The mobile application openly available on Apple’s App Store is being used by U.S. forces in Syria and Iraq to conduct both field artillery and close air support operations against ISIS combatants with resounding success.

The application is called Tactical NAV, and it’s available on the iTunes App Store, and was created by a former U.S. Army captain who used his own life savings to build a low cost and accurate software solution to provide Soldiers and military service members the tools needed to help accomplish their mission at home and abroad, and also protect and save U.S. military lives in the combat environment.

Taken from an email Springer received from a Soldier based in Syria, it states, “I love this app [Tactical NAV] — we all do. We were able to shoot with our M109A6 Paladin using Tactical NAV, and the results were steel on steel. The app is accurate to within 1 meter, all verified by Army survey. Thanks for what you’re doing Jonathan, this thing is a lifesaver,” said the Soldier, whose name is being withheld for operational security measures.

“Since day one, I have always believed the military could utilize smartphones for operational purposes,” said Springer. “I always saw mobile devices as a combat multiplier that could potentially assist military service members during combat operations, and in turn, possibly save their lives in the process.”

He goes on to say, “Why not use what is at our fingertips to operate more efficiently as a military force,” said Springer. “The potential for saving lives using something as cost-effective as an app like Tactical NAV just makes sense.”

Tactical NAV is currently available on the App Store and will soon be available on Google Play. The app assists military service members and first responders with mapping, plotting, and sharing waypoints and location information, along with building overlays and synchronizing assets with other users on the battlefield.

The application is a military-quality software solution that meets the World Geodetic System 1984 standard (WGS 84) and has been tested on various combat missions to ensure the utmost accuracy and reliability that a military-oriented app can, and should, provide.

“Tactical NAV is just as accurate as anything the Pentagon has in their arsenal today. And it does many of the same functions that the Department of Defense spends millions of dollars on — all at a fraction of the cost. And it’s all about protecting the warfighter because when it comes down to it, that’s what it’s all about,” Springer said.