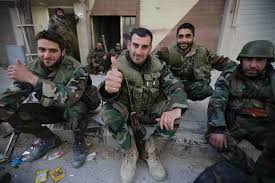 Syria’s military command has declared the U.S-Russian brokered cease-fire over, blaming the country’s rebel groups for undermining the agreement.

In a statement Monday, the Syrian military said that “armed terrorist groups” repeatedly violated the cease-fire which came into effect last week. It said the armed groups also took advantage of the truce to mobilize and arm themselves while attacking government-held areas. The statement said the rebels wasted a “real chance” to stop the bloodshed.