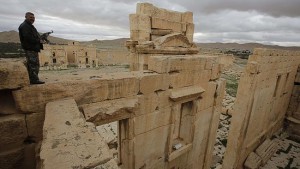 Syria has sent reinforcements to protect the ancient city of Palmyra, which the Islamic State has been steadily advancing towards since Tuesday.

Syria’s army dispatched reinforcements to Palmyra in a bid to push back jihadists who advanced Friday to within touching distance of the ancient city, officials and a monitor said.

“Islamic State group jihadists are now one kilometre (less than a mile) from the archaeological site of Palmyra,” Rami Abdel Rahman, director of the Syrian Observatory for Human Rights, told AFP.

“The regime sent reinforcements and the army is bombing the surroundings of Tadmor from the air,” he said, using the Arabic name for Palmyra.

The ancient metropolis stood on a caravan route at the crossroads of several civilisations and its 1st and 2nd century temples and colonnaded streets mark a unique blend of Greco-Roman and Persian influences.

Since IS’s offensive began on Tuesday night, more than 138 combatants — including 73 soldiers and 65 jihadists — have been killed.

And at least 26 civilians were executed by IS, including 10 by beheading, after they were accused of “collaborating with the regime” in villages near Palmyra that IS overran.

But the governor of central Homs province, where Palmyra is located, said the situation was “under control”.

“The army has sent reinforcements and it is bombing the (IS) positions from the air,” said Talal Barazi.

According to Barazi, the inner city houses about 35,000 people, including displaced Syrians who fled there after their hometowns were engulfed in violence, and the suburbs host roughly another 35,000.

The Britain-based Observatory said more than 100,000 people lived in and around Palmyra.

Since Tuesday, IS seized all regime checkpoints between Palmyra and the town of al-Sukhna, which lies roughly 80 kilometres away.

Syria’s director of antiquities Maamoun Abdelkarim called on the international community to prevent Palmyra’s destruction, which he said would be “an international catastrophe”.

It would not be the first time that government troops have lost control of Palmyra. Rebels held the site from February to September 2013 before the regime recaptured it.

One of the ancient city’s masterpieces, the Temple of Baal, suffered some damage during the accompanying artillery exchanges.

But those rebels did not share the fanatical devotion of IS to demolishing all of the region’s pre-Islamic heritage.

Videos depicting IS destroying other archaeological sites, including Nimrud in Iraq, have been met with international shock.