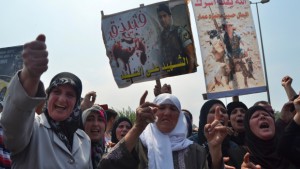 A deal was completed on Tuesday to free 16 Lebanese security personnel held captive by the al Qaeda-linked Nusra Front since 2014, Hezbollah’s al-Manar TV reported, as other live footage suggested their release was imminent.

The deal negotiated with the help of officials from Qatar is expected to include the release of 13 Islamists held in Lebanese jails, including Saja al-Dulaimi, an ex-wife of Islamic State of Iraq and Syria (ISIS) leader Abu Bakr al-Baghdadi, security sources say.

The Lebanese captives were driven to the place where the exchange was due to take place in vehicles accompanied by masked men armed with assault rifles who were chanting “God is great”, footage broadcast by al-Jazeera TV showed.

A convoy of vehicles including Red Cross cars were also shown approaching the area. Three women including one in a full face veil who was carrying a baby were shown getting out of a vehicle. Dulaimi gave birth in prison.

The Nusra Front seized the Lebanese during an attack on the border town of Arsal mounted together with ISIS in August 2014. ISIS is believed to be holding nine soldiers not included in the deal.

Earlier, the body of a Lebanese soldier killed in captivity by the Nusra Front was handed over to the Red Cross and the Lebanese security agency, General Security, the state news agency reported, A security source said the return of the body of Mohamed Hamieh was the first step in the deal. The National News Agency said Hamieh’s body was handed over as a result of the negotiations.

He was one of four soldiers the Nusra Front has killed after capturing them in the Arsal raid.