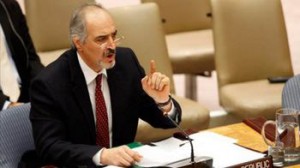 Syria’s Ambassador to the United Nations (UN) Bashar Ja’afari says some 80,000 foreign-backed terrorists have infiltrated into Syria from Turkey and Jordan to date.

Ja’afari told Iran’s Arabic-language Al-Alam television network that members of the terrorist groups Jaish al-Fath and Jaish al-Yarmouk, which operate under the command of al-Nusra Front, itself tied to al-Qaeda, have been trained by Israel, Jordan and the United States.

The Syrian official referred to the UN Special Envoy for Syria Staffan de Mistura, and said “certain Arab and international powers” do not want Mistura’s mission to succeed. This is while, Ja’afari said, the Syrian government is prepared to push forward a political solution for the crisis in Syria.

In its latest report published on June 19, the US State Department said that throughout 2014, Turkey served as a source and transit route for foreign terrorists seeking to enter Syria.

The US and some of its regional allies – especially Qatar, Saudi Arabia, and Turkey – have been supporting the militants operating in Syria since the start of the conflict there in 2011.

According to the UN, more than 220,000 people have been killed and millions displaced due to the turmoil that has gripped Syria for nearly four years.