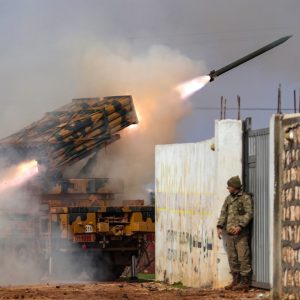 Turkey said that two more of its soldiers were killed Wednesday in a Syrian government attack in northwestern Syria, as steady clashes between the two national armies continued to rack up casualties, ike reported by dailymail.co.uk.

Turkey has sent thousands of troops into the area to support Syrian insurgents holed up there, but hasn’t been able to stop the Russian-backed Syrian government offensive to retake the Idlib province.

Near the Turkish border, the Idlib area is the last rebel stronghold after nine years of war in Syria.

The Turkish Defense Ministry’s statement said that the latest Syrian attack on its troops also wounded six soldiers. It did not provide further details.

The assault came as Turkish President Recep Tayyip Erdogan is scheduled to depart for Moscow where he says he aims to broker a cease-fire in Syria with Russian President Vladimir Putin.

Clashes between Turkish and Syrian forces in northwestern Syria have killed more than 50 Turkish troops in the past month, including 33 soldiers killed Thursday in a single airstrike.

Moscow has laid the blame for the escalation on Ankara, ahead of the summit between the two main power brokers in Syria.

Russian officials have said they hold Turkey responsible for the collapse of a cease-fire agreement reached in Sochi, Russia in 2018. They say Ankara has failed to honor the deal and rein in militants who continued attacking Syrian and Russian targets.