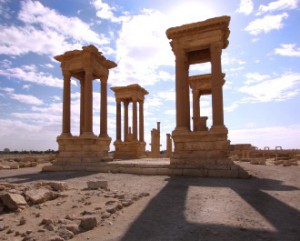 Syria’s antiquities chief voiced cautious relief Sunday as government forces pushed Islamic State ‘IS’ jihadists back from the site of the ancient ruins.

“There was no damage to the ruins, but this does not mean we should not be afraid.”

IS, who have destroyed several ancient sites in neighbouring Iraq, came within one kilometer (less than a mile) of the UNESCO world heritage site on Saturday.

Authorities were worried about potential damage to historic monuments, colonnades and elaborate tombs that were located in Palmyra’s southwest.

Regional governor Talal Barazi said the “IS attack was foiled, and we ousted them from the northern parts of Tadmur,” referring to the other name given to the city of Palmyra.

Barazi added that “the army is still…combing the streets for bombs.”

Following Saturday’s fighting there were no details of any government soldiers dying, but Rami Abdel Rahman, director of the Syrian Observatory for Human Rights, said 13 extremists had been killed during Saturday’s clashes.

‘Waiting to weep and despair’

IS, which began its offensive on Palmyra on Thursday, has executed nearly 50 civilians during its latest attempt to gain a stronghold on the village.

Regime forces were meanwhile trying to keep IS from advancing further, but “If they enter the ancient ruins, it will be worse than when Palmyra was defeated in the time of Zenobia,” Abdulkarim said, referring to the third century, when Palmyra’s Queen Zenobia was defeated by the Romans.

Abdulkarim lamented the perceived inactivity of the international community, asking whether all countries were “waiting to weep and despair” as they did when the extremists destroyed ancient heritage sites in northern Iraq.

Palmyra, founded in the first century, could suffer the same fate as the Iraq’s Nimrud and Nineveh. Ancient tombs, statues and graves in the cities, both thousands of years old, were physically destroyed by IS militants earlier this year.