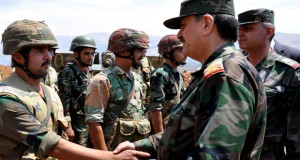 Syrian government forces have recaptured parts of the city of Aleppo which were lost to rebels last month, state media and monitoring sites said.

Backed by air strikes, Syrian troops launched an offensive across the city.

UK-based monitor the Syrian Observatory for Human Rights confirmed that troops had retaken the Armaments Academy.

The Air Force Technical College was also taken back from the rebels, it said.

Meanwhile, US President Barack Obama said on Sunday that the US and Russia were struggling to reach a ceasefire agreement on Syria.

Speaking to reporters at the G20 meeting in China, Mr Obama said: “We have grave differences with the Russians in terms of both the parties we support but also the process that is required to bring about peace in Syria.”

On the battlefront, government forces in Aleppo were “continuing their advance in the area to impose almost a total siege” on the city, state TV channel Sana reported.

A rebel commander told Reuters that there had been a counter-offensive and a battle for full control of the area was continuing.

Some 250,000 civilians have been living under siege in Aleppo’s rebel-held areas since government forces cut them off in July.

Operating with support from Russia and Iran, Syrian President Bashar al-Assad intends to recapture all of Aleppo from the rebel fighters.