You are here: Home / MidEastGulf / Syrian soldiers have become human shields for rebels 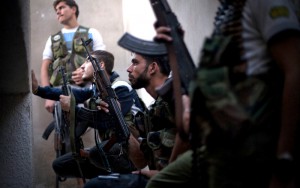 Rebels are caging captured Syrian soldiers and others loyal to the regime and using them as human shields to fend off government attacks, Human Rights Watch and a Syrian opposition group reported.

“Nothing can justify caging people and intentionally putting them in harm’s way, even if the purpose is to stop indiscriminate government attacks,” said Nadim Houry with Human Rights Watch.

Videos posted to social media over the weekend show trucks transporting cages filled with up to eight men or women, the opposition Shaam News Network reported.

“Rebels … have distributed 100 cages, with each cage containing approximately seven people and the plan is afoot to produce 1,000 cages to distribute … in different parts of Douma city particularly in public places and markets that have been attacked in the past by the regime and Russian air-force,” text in one of the videos says, according to the opposition network.

The move came in the days after government attacks on a marketplace in Douma last week killed dozens and wounded hundreds.

The area, only 16 miles (26 km) east of Damascus, has been heavily shelled the past three weeks.

There was no immediate response from the regime and no word from the opposition on whether the tactic had accomplished its goals.

Pro-regime militiamen also used opposition detainees as human shields in recent weeks, according to the Syrian Observatory for Human Rights.

The London-based group relies on activists inside Syria to document human rights violations in the country.

The Syrian Observatory said the militiamen also put detainees inside cages and put them on the roofs of houses in order to prevent the fighters for rebel and Islamist factions from targeting the towns of al- Fu’ah and Kefrayya in the countryside near Idlib. Human Rights Watch also reported the use of the opposition as human shields.