You are here: Home / MidEastGulf / Syrian soldiers and Turkish military clash for first time since offensive 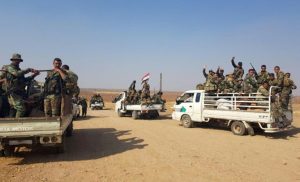 Syrian government forces and the Turkish military clashed on Tuesday for the first time since Ankara launched an offensive in northeastern Syria three weeks ago, a war monitor said according to telegraph.co.uk.

“Heavy fighting erupted for the first time between the Syrian and Turkish armies,” the Syrian Observatory for Human Rights reported.

The Britain-based monitoring group said artillery and machinegun fire was exchanged near the village of Assadiya, south of the border town of Ras al-Ain.

At least six Syrian soldiers were wounded in the fighting, the Observatory said.

The Turkish military and its Syrian proxies attacked Kurdish forces in northeastern Syria on October 9 with the aim of creating a roughly 30-kilometre (20-mile) deep buffer zone.

Kurdish forces agreed to withdraw from a 120-kilometre (75 mile) long, Arab-majority segment of the 440-kilometre (275-mile) border zone, although clashes have been reported since.

Turkey subsequently reached a deal with the Syrian government’s main backer Russia for Kurdish forces to pull back from the entire border area.

Left in the lurch by a US troop withdrawal from the border area, Kurdish forces turned to the government for protection.

Government forces are now expected to deploy along much of the border zone but a 10-kilometre-deep strip is to be jointly patrolled by Russian and Turkish troops, starting from Tuesday.