You are here: Home / Europe / Syrian refugees in Lebanon waiting to come to UK ‘infiltrated by ISIS’ 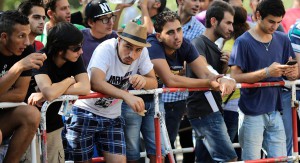 Lebanon is riddled with dormant ISIS cells, according to war correspondent and author Andre Vltchek.

Mr Vltchek, who has written extensively about the region, said jihadists who had arrived in Lebanon were waiting to carry out atrocities there or further afield.

This week, Express.co.uk revealed that most of the 20,000 Syrian refugees set to come here over the next five years will be brought over from Lebanon.

Richard Harrington, Home Office Parliamentary under secretary tasked with the job of getting them here told the International Development Committee the UK would take them from Lebanon instead of the Americans.

“We are also trying to do that with the Canadians and the Australians so it is all organised.”

But in an interview with Counter Punch Magazine, Mr Vitchek said worryingly ISIS had infiltrated the many refugees across Lebanon: “You have a sector of the population who believe that the radical approach is the only future for Lebanon.

“Among the displaced Syrian and Iraqi refugees there is a very small percentage of Jihadists, that hide among the refugees and they join the dormant Lebanese cells.

“These cells stay dormant for a long time.

“They wait for the moment that they can perform a spectacular action from their point of view meaning inflict as many casualties as possible.”

Around two million refugees have arrived in Lebanon, which had a population of around just 4.5 million.

With a weakened Government, close to collapsed economy, and the Syrian war raging on its border, he said “Lebanon’s stability was hanging on by a thread”.

ISIS has carried out attacks in Lebanon, including the worst most recently on November 12 when the twisted jihadis claimed responsibility after two crazed suicide bombers blew themselves up in a busy civilian street in retaliation for Lebanese support for Syrian dictator Bashar al-Assad.

At least 40 people were killed in the attack, which took place in a residential suburb of the bustling capital Beirut.

Mr Vltchek added: “Those terrorist cells were dormant for months and years, in the capital of Beirut.

“But the rest of those terrorists like ISIS were sitting dormant all over the country and in particular in Beirut, and they were waiting for the opportune moment to strike.

“ISIS did strike Lebanon in 2012 and 2013 but nothing as horrific as we have witnessed recently.”

He said the gains against ISIS in Syria following Russian intervention, meant ISIS would like to gain control of Lebanon, or at least the northern areas.

He added: “I don’t really know what the future of Lebanon will be.

“But what I can see clearly is the more the Russians squeeze ISIS out of Syria, the more panic we see amongst ISIS, and they will install themselves in Lebanon.

The Lebanese will inherit them from Syria and the devastation we saw in Syria will come to Lebanon.

“It would be very easy to destabilise a much smaller country than Syria with a weaker central government than in Syria.”

Mr Harrington also admitted to the committee that not all of the asylum seekers being brought here were coming from designated refugee camps as initially pledged by Prime Minister David Cameron.

He said only 30% of refugees were on these camps, meaning the rest were living in rented accommodation in towns and villages, meaning there was potentially more chance of contact with the Jihadists.

Another of Mr Cameron’s pledge’s was we would only bring in UNHCR-registered refugees because they undergo stringent background checks and biometric data recording.

But currently in Lebanon the Government will not allow any new refugees to register with the United Nations High Commissioner for Refugees (UNHCR).

However, the Home Office says that the first million Syrian refugees into Lebanon did register and it is only taking people from that group, despite Mr Harrington telling the committee he would not discriminate against any vulnerable refugees.

A Home Office spokesman said: ” All refugees arriving under the vulnerable persons’ resettlement scheme (VPR) have been registered by UNHCR.

“When they arrive in the UK they have been through a thorough two-stage vetting process to ensure we know who is entering the country.

“We take security extremely seriously in cases referred to us for resettlement, working closely with the UNHCR who have their own robust identification processes in place.

“This includes the taking of biometrics, documentary evidence and interviews.

“When potential cases are submitted by the UNHCR for our consideration they are screened and considered by the Home Office for suitability for entry to the UK.

“This includes the taking of further biometric data.

“We retain the right to reject individuals on security, war crimes or other grounds, including where there is insufficient information to undertake effective screening.

“The Syrian refugees we are resettling in the UK are some of the most vulnerable refugees and they are taken directly from the region.

“We have always opposed the relocation of migrants already in Europe.”