You are here: Home / MidEastGulf / Syrian rebels receive stipends from US to fight Daesh (Islamic State) 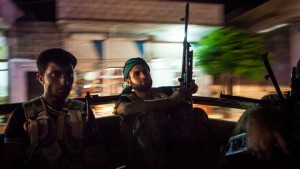 The US will pay stipends to Syrian moderates fighting the Daesh, a Pentagon spokeswoman said Monday.

“We can confirm that Syrian train and equip members will receive stipends while members of the program,” said Elissa Smith. “The trainees are currently receiving a stipend of between $250 and $400 per month, per soldier, depending on skill set, performance and leadership position.”

The move comes after top defense officials acknowledged that the program is very slow and experiencing difficulties in finding and vetting fighters.

The stipend is in line with wages in pre-war Syria.

In the first few months of the conflict, the median wage in Syria was about 12,000 Syrian pounds ($255). The minimum wage was 9,975 pounds ($212), according to the Central Administration of Statistics of Syrian government.

The training of the first group of about 90 fighters began last month, Smith said, and while the US has declined to name the countries currently hosting the program, Jordan announced last month that it started training Syrian opposition groups.

The US signed an agreement with Turkey in February regarding the program, and Saudi Arabia, Qatar and Jordan have long said they would contribute.

“For operational security, we will not announce when coalition-trained Syrian opposition forces enter into Syria,” she noted.

About 6,000 Syrians have so far volunteered for the training program, but more than 4,000 are still waiting to be vetted, according to Pentagon spokesman Col. Steve Warren.

In excess of 1,500 have passed the preliminary screening process, and of the remaining 500, between 100 and 200 have been accepted for training while the rest are no longer a part of the program for various reasons.