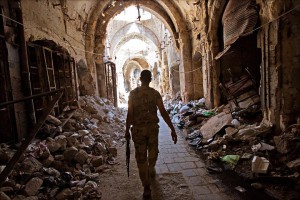 The Syrian Army and allied militias continue to make sweeping advances in the battle for Aleppo, military sources reported on Monday.

Regime forces have driven the rebels from Qadi Askar neighborhood and are now in control of approximately 60% of formerly opposition-held eastern Aleppo.

“Losing Qadi Askar neighborhood was a new blow to the rebels, who have suffered heavy losses […] over the last three weeks,” media activist Ali al-Halabi told ARA News. “At least 22 rebel fighters were killed and dozens more were injured.”

A Syrian Army detachment has also laid siege to the nearby al-Shaar neighborhood.

It appears that there will be no respite in Aleppo city. On Monday, Russia and China vetoed a UN Security Council resolution that would have imposed a seven-day truce in Aleppo.

Russia argued that the ceasefire would allow the rebels to regroup and that time was needed for bilateral talks between Washington and Moscow.

Moscow has instead opened exit corridors and provided guarantees of safe passage. Russian Foreign Minister Sergei Lavrov has demanded that the rebel factions withdraw from eastern Aleppo “or they’ll all be treated as terrorists.”

Saleh al-Zein, a spokesman for the Islamist al-Shamiya Front, told ARA News that they have rejected Moscow’s demands. “This is our city and we’ll fight until the last moment,” he said.

Speaking to ARA News in Aleppo, Al-Zein declared that “Russia is an occupying force and it has to withdraw from Syria instead of demanding that the rebels leave.”