You are here: Home / MidEastGulf / Syrian rebels get Hamas assistance to build tunnels 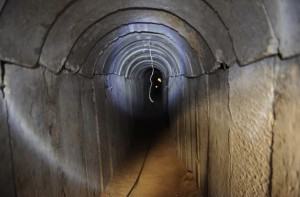 Syrian rebels have been getting technical know-how from forces in Gaza, including Hamas, according to a recent interview.

A news report by the Syrian-based news site Orient News TV got an insider’s view of a rebel tunnel in the Mount Arbaeen area outside the northern Syrian city of Ariha.

“We asked for the advice of our brothers in Gaza,” said one rebel who led a guided tour for the journalist, according to a translation provided by the Middle East Media Research Institute. “They told us that they have been using wooden planks. They even sent me a video and we have been doing it exactly the way they do it.”

In the video, the tunnel is described as 700 meters long. It is packed with explosives, apparently in preparation for a major attack against Syrian government positions nearby.

“They have been working on this tunnel for months now. It will be used to target the fortifications of the regime forces on Mount Arbaeen,” the journalist said in his report.

The rebel group behind the project was reported to be Ahrar al-Sham, which could number over 10,000 fighters, according to a 2013 report in the Economist. To boot, the group may also enjoy financial support from Qatar. The group has been involved in heavy fighting in the country’s north around the cities of Aleppo and Idlib.