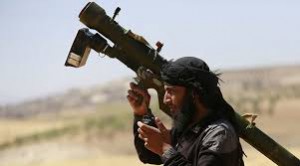 Gathered for two days of talks in the Saudi capital, the High Negotiations Committee (HNC) umbrella group denounced the “scorched earth policy” of President Bashar al-Assad and his allies.

HNC spokesman Salem al-Meslet said after the talks that the opposition was counting on “brotherly countries and friends… to lift the embargo on sophisticated weapons imposed on the opposition.”

The calls comes after a high-level rebel source told Middle East Eye that US allies including Saudi Arabia and Qatar were preparing to flood Aleppo with such weapons, adding that Syrian helicopters would begin “falling from the sky” within weeks.

“The US confirmed the green light to begin sending them to rebels through supply routes still open through Jordan and Turkey,” the source said. “Rebels are being told only to target Syrian helicopters, not Russian – but it’s not clear they will abide by this.

“The US won’t let Aleppo fall. We can expect to see Syrian helicopters falling from the sky within weeks.”

Charles Lister, an expert on the Syrian conflict for The Middle East Institute, reported this weekend that shipments had already been sent to “vetted” Free Syrian Army groups in northern Syria.

Evidence of their use has yet to be confirmed however.

There are long-held concerns that the new weapons could fall into the hands of militants with agendas beyond Syria: Manpad systems are a huge threat to commercial aviation during take-off and landing.

The Los Angeles Times reported in May that caches of anti-tank missiles made their way to hard-line factions in Syria after the CIA gave them to select “moderate” allies.

“It only takes one stray Manpad to sneak into Turkey and that would be a very bad thing,” a US official told the newspaper on condition of anonymity.

Shashank Joshi, a senior research fellow at the Rusi think-tank, told MEE: “Gulf states and Turkey understand the serious risks involved in supplying Manpads, in some ways they would bear more of the risk than anyone else to civilian and passenger airlines. I think they should be extremely cautious before proceeding with such moves.”