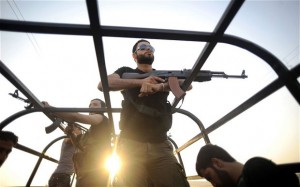 A prominent Syrian rebel leader was assassinated on Wednesday by Islamic State (ISIS) militants. Local sources reported that the attack took place in the countryside of Syria’s southern Daraa Governorate.

Hassan Abazid, the leader of Jund al-Farouq, was killed along with three of his guards in a car bomb attack in the town of Gharz.

Jund al-Farouq is a powerful Free Syrian Army (FSA) faction. Its leader, Hassan, led military operations in Daraa against both ISIS and the Syrian Army.

“ISIS has earlier vowed to target all rebel leaders who refused to pledge allegiance to their Caliphate,” media activist Muhammad Obaida told ARA News in Daraa.

“An ISIS jihadist infiltrated into the rebel-held town of Gharz and carried out a car bomb attack near a rebel convoy. Hassan and three other rebels were killed, and at least two more were injured in the attack,” a local source reported.

In July, ISIS claimed responsibility for the assassination of another well-known Syrian rebel leader in Daraa Governorate. Shakir Nabbut al-Rashwani, the commander of Homs al-Waleed, was reported dead after militants blew up his car in the al-Balad District.

“Al-Rashwani was a main enemy for ISIS in southern Syria. He led rebel operations against this barbaric group in Daraa and killed many of them. His death came as a shock to all rebel factions in Syria,” spokesman of the Shamiya Front, Saleh al-Zein told ARA News at the time.