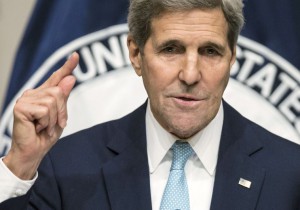 Members of the Syrian opposition lashed out at US Secretary of State John Kerry on Monday, accusing him of taking the side of Iran and Russia in discussions over Syria’s future.

Kerry’s demand stands in contrast to the Syrian opposition’s insistence on participating in the Geneva talks only after the regime ends its siege on Deir al-Zor and Madaya, stops bombing civilians and liberates all the political detainees in Syria.

Another condition of the Syrian opposition that was not met by Kerry, according to Syrian reports, is the departure of Syrian President Bashar Assad from power. The opposition has consistently insisted that Assad must not be part of Syria’s future, and only on Saturday, Kerry himself expressed a similar attitude, referring to Assad as “the magnet that attracts violent terrorism.”

However, on Sunday, Kerry adopted the Iranian stance which favors the formation of a national unity government in Syria that Assad can be part of, and relinquished the option of establishing a transitional governing body during Geneva talks, which necessarily entails the departure of Assad.

Following his meeting with the Syrian coordinator, many Syrian opposition members claimed that Kerry had essentially demanded they accept Russia’s and Iran’s diktats. These claims may be well-based, since Kerry’s demands are a non-starter for the radical factions within the Syrian opposition, such as Ahrar al-Sham and
Jaish al-Islam, that reject any compromise that includes Assad.

Therefore, these factions will presumably refuse to participate in the Geneva talks, serving the interests of Russia, who defines them as “terror organizations.” However, by adopting Russia’s stance and boycotting these radical factions that are regarded by many Syrians as their saviors, Kerry might push moderate factions into the fold of these radical jihadist factions.

According to the Syrian opposition, Kerry’s demands show that the US is striving for a political solution in Syria that will preserve Iran’s dominance in the country. However, the US is eager to affirm its alliance with Iran’s rival, Saudi Arabia. In his visit to Riyadh on Monday, Kerry stated that US relations with the Saudi kingdom are stronger than ever and stressed that they will stay so because the US acted to annihilate Iran’s nuclear threat.

However, the furious reactions on Arab social media to Kerry’s meeting with Hijab make it hard to believe that the US secretary of state is still regarded as trustworthy in the Arab world. On Twitter, someone suggested that the US State Department start tweeting in Farsi, because “no one in the Arab world believes you.” Others called Kerry “the foreign minister of the United States of Iran.”