You are here: Home / Europe / Syrian migrant convicted for terrorism in Austria

Witnesses said he had boasted in a refugee camp about crimes he committed. The man said he killed pro-government soldiers in Syria with diesel injections: an investigation found he had ISIS propaganda material on his mobile phone 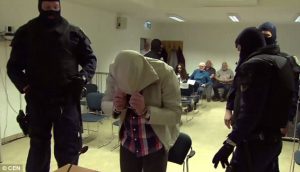 A Syrian refugee has been convicted of terrorism in Austria after boasting about shocking crimes he committed while fighting for ISIS, including killing prisoners by injecting them with diesel.

The Muslim extremist was sentenced to three years in prison by a regional court in the north-central Austrian city of Salzburg for joining a terrorist militia, like reported by dailymail.co.uk.

The 23-year-old, who has not been publicly named, strongly denied that he had been an ISIS fighter but witnesses convinced the judges otherwise in a trial that was held in private under strict security measures.

Independently, three of the four witnesses said that the Syrian asylum seeker had boasted in a refugee camp in the country about the atrocities he had committed.

The man said several times that he had killed pro-government soldiers in Syria by injecting them with diesel.

Yet the Syrian denied ever having said this to the men with whom he had shared a tent at the camp, and said that the witnesses misunderstood him as he had merely talked about television news.

One of the witnesses reported the man to the camp authorities, after which he was arrested by Austrian police.

Local media reported that in his first interrogation the Syrian made a confession.

But at the start of the trial the defendant changed his statements completely and claimed that he had nothing to do with ISIS.

An investigation found the man had ISIS propaganda material on his mobile phone and tablet.

Together with the Syrians’ often incomplete explanations, the judge deemed there was enough evidence to convict him.