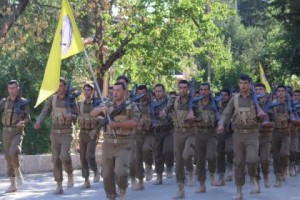 The first recruits enrolled in military service with the Democratic Union Party (PYD) started training in the local administration of Afrin on Saturday 4th July, in the presence of Kurdish officials reports Welati.

200 Kurdish youths started the 45 day training, after which they will begin a 6-month service period as part of the Self Defence Forces.

Deputy Minister of Defence of the Afrin Canton Dîcle Mihemed told the pro-PYD news agency Hawar News that military service is compulsory. “The law states that youths between 18 and 30, without going to the battlefronts, will be enrolled in the army for 6 months,” she said.

The Kurdish official said recruits will join the defence service for 6 months a year. Those who are only children or have brothers or sisters who have died as part of the Kurdish Asayish, the Kurdistan Workers Party (PKK) or People’s Protection Units (YPG) are exempt from service.

On July 13, 2014, the legislative council for the canton of Jazirah, which was appointed by the PYD, enacted a law on compulsory military service entitled the Duty of Self-Defence. On May 16th, 2015, the PYD in Afrin announced the local administration had also introduced a similar law.

According to Welati, the forced recruitment of youths by the PYD has led to the migration of many who refuse to join the PYD-led forces. Many youths were arrested by the Kurdish Asayish (Security Police) and forcefully enrolled in military service in Hasakah Province.