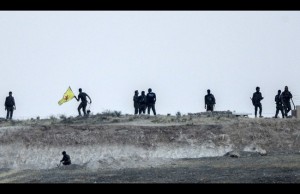 Syrian Kurdish fighters and their rebel allies seized the border town of Tal Abyad from ISIS militants Monday in a development with potentially huge ramifications for both Turkey and the jihadis’ self-proclaimed capital of Raqqa.

The Kurdish YPG said that its fighters had entered most of Tal Abyad as well as the nearby border crossing leading to Turkish territory, while also cutting off a road south of the town that leads to Raqqa.

An unspecified number of ISIS fighters were believed to be holed up in Tal Abyad preparing for a last stand. The Syrian Observatory for Human Rights, a Britain-based monitoring group, said 40 ISIS fighters were killed by U.S.-led coalition airstrikes as they tried to flee to the nearby town of Ain Issa, also under attack by the rebels and Kurds.

In surrounding Tal Abyad, YPG fighters have now linked up two of the three self-administered “cantons” they control along the border with Turkey, which has expressed its alarm over advances by the Kurds.

“Tal Abyad is a financial and logistical hub for ISIS. Once you cut this hub it is going to be very hard for ISIS to smuggle in fighters, to sell oil and deal in the other goods they deal in.”

But as the YPG and its allies from several small Free Syrian Army-aligned militias celebrated the victory, more than a dozen other rebel groups accused the Kurdish militia of deliberately displacing thousands of Arabs and Turkmens as it pushes deeper into ISIS strongholds in northern Syria.

The accusation, which was not backed by evidence of ethnic or sectarian killings, threatened to escalate tensions between ethnic Arabs and Kurds.

“YPG forces … have implemented a new sectarian and ethnic cleansing campaign against Sunni Arabs and Turkmen under the cover of coalition airstrikes which have contributed bombardment, terrorizing civilians and forcing them to flee their villages,” the statement issued by rebel groups said.

The rebel groups, which include the powerful Ahrar al-Sham and the Islam Army, said the alleged ethnic cleansing is concentrated in the northeastern predominantly Kurdish province of Hassakeh and in Tal Abyad.

The statement seemed to echo comments made last week by Turkish President Recep Tayyip Erdogan in which he said the U.S.-led coalition fighting ISIS in Syria were bombing Arabs and Turkmens near Turkey’s border.

The clashes have prompted thousands of civilians to flee, with some 20,000 crossing into Turkey since last week, including at least 3,000 for the second consecutive day.

The flood of refugees has created chaos at times, with some cutting through the border fence or scrambling over loops of barbed wire in frustration at the delay in crossing. Khalil strongly refuted the claims, dismissing the groups as “people who use sectarian language.” He sought to calm nerves, saying the YPG is a Syrian national group whose battles are directed solely against ISIS.

“We say to residents of Tal Abyad, there is no reason for you to cross to another country [Turkey]. Our towns are open to you, you are our people and you will return to your towns, villages and properties,” he said. He pledged that the YPG will not interfere in administering Tal Abyad.

The developments came as more than 23 civilians were killed by heavy rebel shelling on government-controlled areas of Aleppo, including near a mosque where children were taking religious lessons, state television said.

In the southern province of Swaida, anti-regime activists reported fierce clashes between rebel groups and regime forces at a disused military airport near the village of Thaaleh.

Pro-regime social media reported at least seven regime soldiers who were killed in the fighting, including a top Air Force intelligence official.

In Damascus, the U.N. envoy for Syria began a visit with several messages for President Bashar Assad’s government – the use of barrel bombs is unacceptable and a Syrian-led settlement is urgently needed to end the war.

U.N. spokesman Stephane Dujarric said Staffan de Mistura, who held a meeting with Foreign Minister Walid al-Moallem, is looking forward to hearing the views of senior Syrian officials on how to implement the June 2012 Geneva communiqué calling for a transitional government.