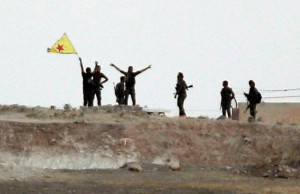 Fighters from the ultra-hardline Islamist group were, however, still in control of the town of Ain Issa, 50 km (30 miles), north of Raqqa city, which the jihadis seized from the YPG militia in an attack Monday, the Observatory reported.

That attack on YPG-held areas followed an intensification of airstrikes on Raqqa city over the weekend, which U.S. Defense Secretary Ash Carter said Monday were aimed at disrupting the militants’ ability to respond to YPG advances north of Raqqa.

The YPG, a militia operating mostly in predominantly Kurdish areas of northern Syria towards the Turkish border, has emerged as the only significant partner in Syria for U.S.-led alliance fighting to tackle ISIS both there and in Iraq.

The YPG, backed by small Syrian rebel groups, has made significant gains against ISIS in Raqqa province in recent weeks, seizing Tal Abyad at the Turkish border on June 15 before advancing south to Ain Issa.

While the YPG has shown itself to be a potent force in the fight against ISIS, its effectiveness is seen to diminish beyond the predominantly Kurdish areas it was set up to defend in northern and northeastern Syria.

The United States aims to train and equip Syrian rebel fighters it deems politically moderate in order to fight ISIS in Syria. But the Pentagon said on June 18 the effort was moving more slowly than expected.

U.S. President Barack Obama said Monday the United States would do more to train and equip “the moderate opposition.”