You are here: Home / MidEastGulf / Syrian Kurds expand gains against ISIS in northeast 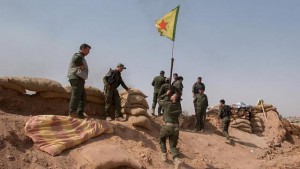 A Syrian Kurdish militia has captured a town from the Islamic State in Iraq and Syria (ISIS) militant group in the northeast, a group monitoring the war reported on Wednesday, compounding recent losses for the militants in a strategic corner of Syria.

The capture of the town of Al-Mabroukah by the YPG militia opens the road for its forces to advance towards the Islamic State’s stronghold in Raqqa province, the Syrian Observatory for Human Rights reported.

While losing ground in the northeast, ISIS has launched a new offensive in central Syria, where it has seized wide areas from the Damascus government including the ancient city of Palmyra, also known as Tadmur.

The YPG, supported by United States-led air strikes, have been making steady gains this month against ISIS in the northeast, which is important in the battle against the jihadists due to its location bordering territory held by the group in Iraq.