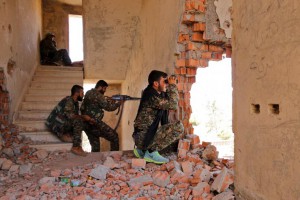 The Kurdish YPG militia on Monday captured a town from Islamic State fighters in northern Syria after a month-long offensive against the ultra hardline militants in the area to cut their supply lines, the Syrian Observatory for Human Rights said.

The Observatory said the town near the Euphrates River was a launchpad for Islamic State to wage raids on the Kurdish-held town of Kobani further north at the border withTurkey.

U.S.-led air strikes assisted the Kurds in the assault, said Rami Abdulrahman, who runs the Observatory.

The YPG, backed by small Syrian rebel groups, has made significant gains against Islamic State in Raqqa province, seizing Tel Abyad at the Turkish border on June 15 before advancing south and capturing the town of Ain Issa, 50 km (30 miles) north of the militants’ Syria stronghold of Raqqa city.

In July the U.S.-led coalition has conducted some of the most sustained raids in northern Syria against the militants since the campaign began nearly a year ago.

The raids were aimed at curbing the militants’ ability to operate out of Raqqa and prevent them from fighting back against Kurdish advances, according to U.S. officials.