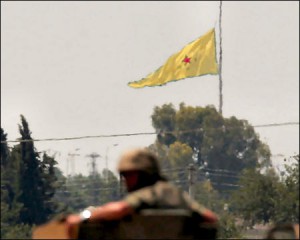 The General Coordination of Rojava Cantons in Syrian Kurdistan has released a statement about the continued attacks of the Turkish state against the Kurdish People’s Protection Units (YPG) positions in Kobani and Gire Spi.

The statement pointed to a remarkable increase of the inhuman practices by the AKP government ignoring the international law and the threats uttered by Turkish President Recep Tayyip Erdogan and the ruling AKP party against Syrian Kurdistan, ahead of November 1 election.

Threatening continued assaults on the Kurdish militia in Syrian Kurdistan, the Turkish president has warned he will not request anyone’s permission to do whatever is necessary to prevent the spread of support for Kurdish autonomy, even if it requires bombing US-allied rebels.

In a clear message to dissuade Kurds from supporting the self-declared autonomous town of Gire Spi (Tel Abyad) near the Turkish border, President Tayyip Erdogan said that he will “do what is necessary,” including using force, to eradicate the potential source of separatism along its borders.

The General Coordination of Syrian Kurdistan Cantons stated that; “Putting the decisions of the AKP and Erdogan into practice instantly, the Turkish military pushes aside the neighbourhood law and respect to a neighboring land by conducting a barbarian bombardment with jets and heavy weapons against the civilian people and YPG positions. The YPG forces that are being targeted by Turkish state’s attacks have proved themselves to be the greatest defender of humanity and democracy values by waging a successful fight against the Islamic State (IS) militants.”

“YPG have also announced everyone that it struggles for a united federal and democratic Syria. Turkish Prime Minister Ahmet Davutoglu’s remarks confirming the attacks against YPG positions in Rojava territory has been an official confession of their support to IS gangs and their preference of terror instead of democracy.” the statement added.

Describing these attempts by the Turkish state as a “provocation”, the General Coordination of Rojava Cantons urged the international coalition forces to make their stance against this situation clear and put pressure on the Turkish state to end its inhuman attacks.

The Coordination called upon the pro-democracy peoples of Turkey to punish such practices by the Turkish government, remarking that the peoples of Syrian Kurdistan (Rojava) should also give the most meaningful answer to the Turkish state’s attacks by standing by the YPG in a stronger way.

Last week, a local council led by the Democratic Union Party (PYD) declared it part of the system of autonomous self-government established by the Kurds. Since the conflict in Syria broke out in 2011, Syrian Kurds have declared three autonomous zones, called “cantons,” across Syrian Kurdistan (northern Syria), but deny that they are aiming to establish their own state.

The YPG model in Syria is now the Pentagon’s new strategy to defeat IS. Secretary of Defense, Ashton Carter, announced earlier in October a new plan to strengthen cooperation with the Syrian Kurds by providing them arms, and new equipment.

Russian president Vladimir Putin in September said “We should finally acknowledge that no one but President Assad’s armed forces and Kurdish YPG militia are truly fighting the Islamic State and other terrorist organizations in Syria”.