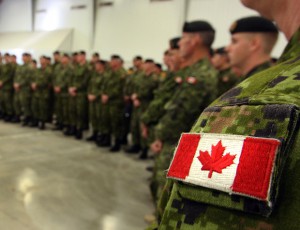 Appearing by videoconference, Salih Muslim, co-chair of the Democratic Union Party, thanked Canada for conducting air strikes against ISIL but said money would be required to rebuild the devastated regions its fighters have taken back from the extremists.

Sinam Mohamad, the European representative of the Kurdish region of Syria, known as Rojava, also emphasized the need for international assistance to restore centres such as Kobani, which the Kurdish forces retook from ISIL but which lies in ruin.

“I think that participation of Canada in this coalition, it’s very important. It means that Canadians value the principles of humanity and democracy,” she said of the coalition military campaign that includes Canadian CF-18s and 69 Special Forces advisers.

In an interview, she said the Kurds needed heavy weapons and training, but also assistance for hospitals, schools and houses for those returning to their liberated but razed towns. “It’s very important,” she said. “Everybody, they say ‘yes, yes.’ But it’s time to see something concrete.”

Conservative MP John Duncan, who was among several hundred at the conference organized by the Toronto Kurdish Community and Information Centre, said he would share the concerns with his colleagues in Ottawa. MPs Mark Adler and Bernard Trottier were also present, along with Toronto city council member Jim Karygiannis.

The Kurdish minority has been doing much of the heavy lifting in the fight in Syria and Iraq. In northern Syria, the Kurdish YPG militia, and the female brigades known as YPJ, have scored several victories against ISIL, with the support of the coalition air campaign.

“Even the armies of the states like Syria and Iraq could not stand against them, only the Kurdish people because they are very well organized,” Muslim said, “and they defeated them and these victories will continue until we finish (ISIL) from the world.”

Officially, Ottawa disapproves, warning the government can’t help Canadians who get into trouble in Syria and Iraq. Those moved by the suffering in the region should join the Canadian Forces or get involved in humanitarian work, the government says.

The Kurdish officials, however, did not appear to see it as a problem. “Of course we are also happy because we have fighters among YPG and YPJ from all over the world,” Muslim said in his speech, which was broadcast on a screen above the Canadian flag, flanked by the YPG and YPJ banners.

“As you know we have now martyrs among our people from England, from Germany, from Australia. Recently an American member was martyred in Kobani, which is very honourable for us,” he said. “And of course you are Canadian, you have some people also fighting among YPG.”

The Canadians reportedly in the YPG international brigades include a 67-year-old. Brandon Glossop, a former member of the Princess Patricia’s Canadian Light Infantry, recently returned from Syria, bringing with him an ISIL flag as a souvenir.

On July 9, the YPG international brigade, the Lions of Rojava, posted a photo on its Facebook page of an 18-year-old from Victoria, B.C., calling him a “new member” and referring to him by the Kurdish name Heval Savas. “He’s not there,” his mother said last week when contacted by a reporter. She declined to explain before hanging up the phone.

“There are so many fighters, they come recently from America, from Europe, from Britain,” Mohamad said. She said while she has met U.S. volunteers, she was not aware of any Canadian fighters. Most have been moved by the brutality of ISIL, she said.

Adler told the audience the war against the “psychopathic killers” of ISIL was not just a Kurdish fight. “This is a fight for values that we hold so dear … and we will not roll over, Canada will do its part as it always has throughout history.”