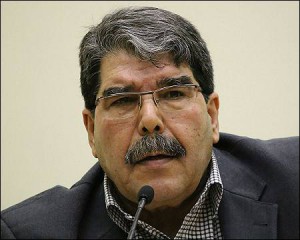 The statement comes at the Legislative Assembly of the Jazeera (Cizire) Canton in Syrian Kurdistan, Rojava, held its 43rd meeting on Saturday.

Muslim who also attended the meeting spoke about the political developments in the region and the world.

Muslim said the Kurds are now having diplomatic talks with all the powers around the world, and attributed this success to the struggle and efforts made by the Kurdish people in political, military and diplomatic arena.

Muslim stated that Democratic Autonomous Administration of Rojava will open missions in Moscow, Berlin and Paris in the wake of talks in the mentioned places.

PYD Co-chair said this was a significant development following the opening of the first mission in Sulaimani city, the cultural capital of Iraqi Kurdistan, in August, 2015.

Syrian Kurdish PYD leaders last Wednesday held talks in Moscow with Russia’s deputy foreign minister over the conflict in the war-torn nation, including talks about further steps toward the opening of a Russian office.

Deputy minister Mikhail Bogdanov hosted the co-chair of the PYD Asya Abdullah and the head of the administration in the Kobani Canton of Syrian Kurdistan Anwar Muslim, Russia’s foreign ministry said in a statement.

Ankara has warned Moscow and U.S. it would not tolerate Kurdish territorial gains close to its frontiers in Syrian Kurdistan.

Following Jazeera (Cizîre) and Kobanê cantons, Efrin (Afrin) has officially proclaimed the establishment of its government of Democratic Autonomy in January 2014.